In this article, you will learn how to extract the sentiment score in negative, positive values and neutral from any given text using the Vader Sentiment library.

Sentiment Analysis can assist us with unraveling the mind-set and feelings of general people and assemble keen data with respect to the unique situation. Sentiment Analysis is a cycle of examining information and characterizing it dependent on the need of the examination. Like - In the business field organizations use it to build up their strategies, to comprehend clients' sentiments towards items or brand, how individuals react to their campaigns or item dispatches. It is also used to screen and analyse social phenomena, for the spotting of potentially risky circumstances.

VADER stands for Valence Aware Dictionary and sEntiment Reasoner which is a lexicon and rule-based sentiment analysis tool that is explicitly sensitive to feelings communicated in social media, political speech, and functions admirably on text from different areas. VADER is a less asset expending sentiment analysis model that utilizes a lot of rules to determine a mathematical model without unequivocally coding it. VADER expends less assets when contrasted with Machine Learning models as there is no requirement for immense measures of preparing information. VADER's asset productive methodology causes us to unravel and measure the feelings contained in streaming media, for example, text, sound or video. VADER doesn't experience the ill effects of a speed-execution trade off.


The successful execution of the command looks something like this -

Sentiment Analysis using Vader in Python is easy process. For implementing, create a new project file and import SentimentIntensityAnalyzer class at the top from vaderSentiment.vaderSentiment module and initialize it. The SentimentIntensityAnalyzer class gives a sentiment intensity score to sentences. It has many in-built methods, like - polarity_scores, sentiment_valence, score_valence and so on.

After computing the polarity score, We can also calculate the percentage of each sentiment present in that sentence using "pos", "neu" and "neg" keys.

The above code returns the following output - 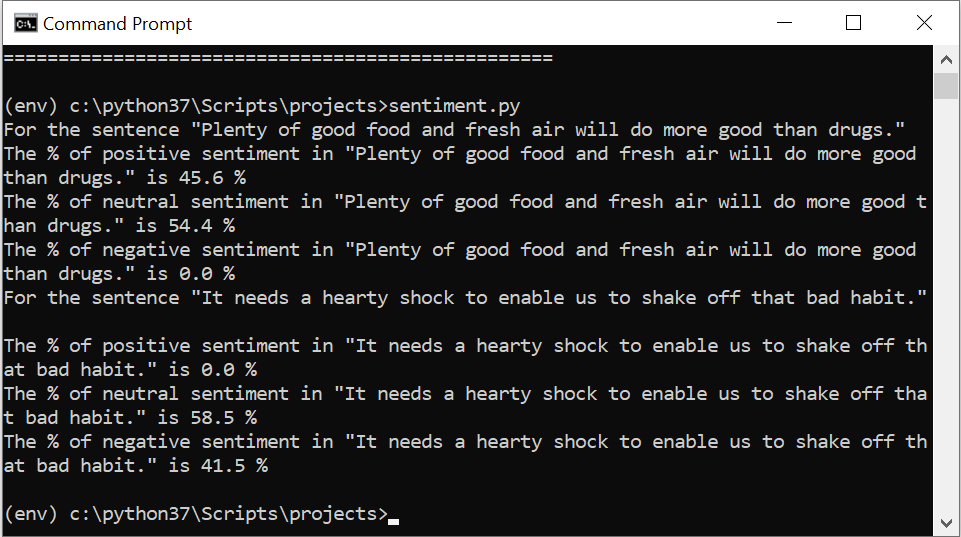